This book is edited by Crina Baltag and published by Wolters Kluwer in February 2017. This volume celebrates the fiftieth anniversary of the Convention on the International Centre for Settlement of Investment Disputes (ICSID Convention or Convention) with an overview and analysis of the International Centre for Settlement of Investment Disputes (ICSID) case law to date and, focusing particularly on unsettled issues, assesses possible developments in the institution’s next phase. Now in its fiftieth year and ratified by more than 150 states, the ICSID received its 500th case in 2015. It is a collection of twenty-two essays by prominent practitioners with substantial experience in investment arbitration law. Albert Badia contributed to the book with an essay in Chapter VI called “Attribution of Conducts of State-Owned Enterprises Based on Control by the State”. 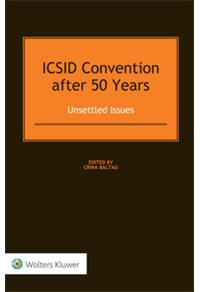 Do NOT follow this link or you will be banned from the site!
This site uses cookies only to collect information about how visitors use our site. By continuing to navigate this site, you accept our use of cookiesI agreeMás información